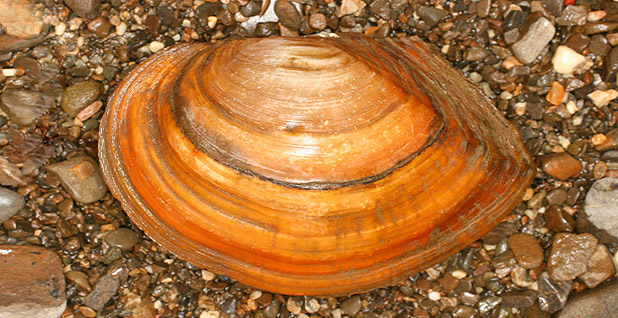 The Chinese pond mussel is considered an invasive species in the United States. Alexander Mrkvicka/Wikimedia Commons

In a notably successful campaign against a troublesome invasive species, Fish and Wildlife Service officials today are applauding eradication of the dinner plate-sized foreign intruder from New Jersey ponds.

Coming amid broader efforts on Capitol Hill and elsewhere to uproot and fend off myriad invasive species, the relatively small-scale and low-budget collaborative project in New Jersey’s Hunterdon County can offer lessons for others.

Underscoring the stakes, Schrading added that “under certain conditions, this invasive species could have spread across the eastern U.S., with New Jersey at the epicenter.”

Some species have already run rampant.

Invasive species cost the United States an estimated $120 billion in economic losses and management expenses annually, according to the National Invasive Species Council.

The council is part of the Interior Department and is currently under the staff leadership of an acting director, Stanley Burgiel. Burgiel replaced the previous executive director, Jamie Reaser, who left the post last summer.

Biologists believe the larvae of Chinese pond mussels first hitchhiked to a New Jersey fish farm in a tank of live carp shipped from China.

The larvae established themselves in the muddy bottoms of ponds at the fish farm, which supplied carp to Asian restaurants. In 2007, the retiring owners sold their farm to the New Jersey Conservation Foundation for a nature preserve; in 2010, the mussels came to light (Greenwire, Sept. 27, 2010).

“This was the first population discovered in North America, and as far as we know, the only one,” Tim Morris, stewardship director for the New Jersey Conservation Foundation, said in a statement. “We knew we had to keep them from spreading.”

The former fish farm is in the headwaters of the Wickecheoke Creek, a Delaware River tributary.

With the help of $22,000 in funding from the Fish and Wildlife Service, state, federal and private partners set about combating the mussels whose danger was demonstrated by a promiscuous spread through multiple European countries over the past three decades.

Nine ponds at the former New Jersey fish farm were treated from July through September of this year with a copper-based algaecide called EarthTec QZ, which is approved for killing invasive mussels.

Lawmakers in recent years have floated various proposals targeting invasive species, including a bill last Congress to direct the U.S. Postal Service to issue and sell a special stamp as an additional source of funds.

One bill this Congress, H.R. 380, would require the Commerce and Interior departments to consider the threat of invasive species before mandating that a new fishway be built. Fishways are structures placed around constructed barriers to give fish the opportunity to migrate.

A wider-ranging proposal in the Senate, S. 268, would require federal agencies to put in place strategic programs to control invasive species and establish monetary-prize competitions for technological innovation in invasive species management, among other steps.

Reprinted from Greenwire with permission from E&E News. Copyright 2019. E&E provides essential news for energy and environment professionals at www.eenews.net.